The Alliance are set to face off against one of the best teams in Dota 2 in Team Secret in Round 2 of the Upper Bracket portion of the DreamLeague Season 13 Leipzig Major 2020 playoffs.

While this isn’t a matchup expected to go down as one of the classics, who knows? The Alliance has proven so far that they have a lot of fight in them. Although they face an uphill climb against Team Secret, they’re not likely to go down without putting up a good show.

With that said, you can expect us to have a betting prediction for this must-watch series. Read below to find out our picks for the Team Secret vs Alliance matchup.

The Alliance are heavy underdogs in the eyes of both oddsmakers and audiences alike, and for a good reason — Team Secret have been one of the best Dota 2 teams in the world for the better part of the past three years.

You could even argue that they got even better this season. Adding TI7 champion Lasse Aukusti “MATUMBAMAN” Urpalainen to their ranks lets them slot Michal “Nisha” Jankowski back into his natural position as a midlaner. At the same time, because of both player’s flexibility, Team Secret can switch the player’s positions depending on the drafts.

With two flexible playmakers in Ludwig “zai” Wåhlberg and Yazied “YapzOr” Jaradat rounding out the roster, Clement “Puppey” Ivanov and Lee “Heen” Seung Gon have a lot of tools at their disposal.

While The Alliance are no doubt talented, they have neither the chemistry yet nor experience to outwit and outmatch Team Secret.

As spectacular Nikolay “Nikobaby” Nikolov has been this season, he has had a tendency to vanish against elite competition. Not to mention, we haven’t really seen Neta “33” Shapira live up to the potential that he once showed in prior seasons. Plus, Puppey knows Adrian “Fata” Trinks all too well after having played with and against him in previous seasons.

Finally, the data also proves that The Alliance have yet to take a map off against Team Secret in a best-of-three series this season.

With that said, we expected Team Secret to school The Alliance when they square up. 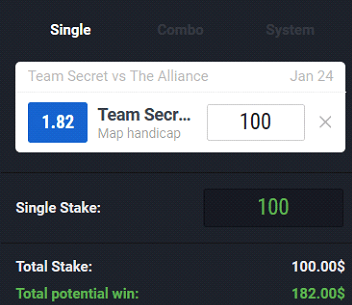