We’ve got quite the match in the upper brackets finals of the Dota 2 tournament, ONE Esports Dota 2 Singapore World Pro Invitational, with Evil Geniuses set to take on the dark horses of the tournament, Gambit Esports.

Read on below for our betting prediction for tomorrow’s much-anticipated match-up.

Evil Geniuses and Gambit Esports were the standouts of Group B, placing 1st and 2nd, respectively. Both also split their series, which suggests that these two teams are much more evenly-matched than most people realize.

Then again, that was before we saw the drubbing that Evil Geniuses gave Team Secret in the opening rounds of the playoffs.

Facing off against their toughest challenge of the tournament yet, Evil Geniuses made short work of a team considered as one of the three best Dota 2 teams in the world right now. The synergy that was missing from them at the MDL Chengdu Major was notably present in their series against Team Secret, especially in regards to how well their trio of core players seemed to mesh so well together.

Roman “RAMZES666” Kushnarev and Abed Azel “Abed” L. Yusop seem to have finally settled in with their new team.

This is a scary thought. Lest we forget, RAMZES666 and Abed were, prior to the new matchmaking system, the 4th and 1st players to reach 10,000 matchmaking rating points, which is a feat that only a handful of players have ever reached in the history of Dota 2.

If Evil Geniuses can carry their momentum from today’s win tomorrow, it doesn’t matter who they’re facing — they’re just too good and too hot right now to lose.

It’s hard to see a scenario where Evil Geniuses loses to Gambit Esports tomorrow. Evil Geniuses’ captain, Tal “Fly” Aizik, isn’t exactly a captain known for underestimating opponents. Not to mention, RAMZES666 is quite familiar with how Gambit Esports players after having clashed against Artsiom “fng” Barshak numerous times in the CIS region in the past.

This isn’t to say that this will be an easy win though. In fact, we dare say that it’ll be the opposite.

We expect to see Gambit Esports pull out all the stops and do everything they can to beat Evil Geniuses. However, at the end of the day, the talent disparity, from the cores down to the captain, is just too great to overcome.

Simply put, Evil Geniuses are the better Dota 2 team, which is why they’re our pick to win. 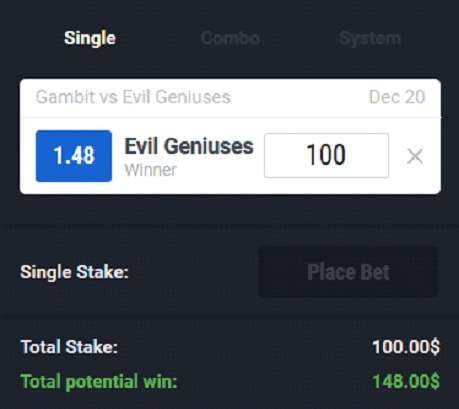